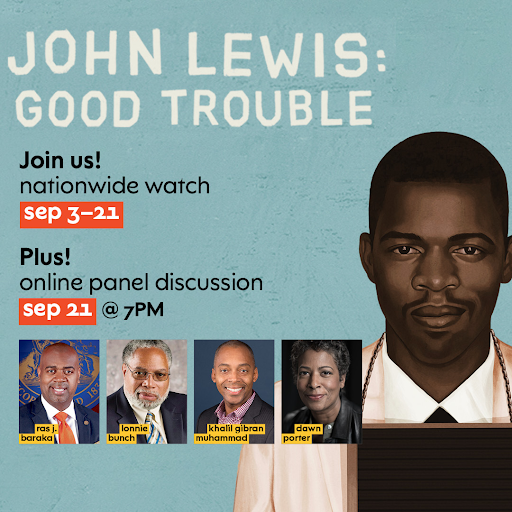 John Lewis: Good Trouble is an intimate account of legendary U.S. Representative John Lewis’ life, legacy, and more than 60 years of extraordinary activism—from the bold teenager on the front lines of the Civil Rights movement to the legislative powerhouse he was throughout his career. St. Paul’s Ordway Center is hosting an online screening of the documentary that includes film rental, to watch at your leisure, exclusive access to a 15-minute interview between Congressman John Lewis and Oprah Winfrey, exclusive access to a one-hour panel, recorded in July, between the film’s director, Dawn Porter, and two of the original Freedom Riders, Dr. Bernard Lafayette and Dr. Rip Patton, and access to a panel discussion of the film, hosted by the New Jersey Performing Arts Center, on Monday, September 21 at 7:00pm CST. The cost is $12, five dollars of which will be donated to the Ordway.

The film chronicles Lewis’s 60-year history as a civil rights leader and includes rare footage from his life as well as interviews with him and colleagues.

Facilitated by New Jersey Performing Arts Center, the panel discussion features Ras J. Baraka, Mayor of Newark, New Jersey; Dawn Porter, the film’s director; Khalil Gibran Muhammad, Professor of Race and Public Policy at Harvard Kennedy, as well as the former Director of the Schomberg Center for Black Research and Culture; and Lonnie Bunch, head of Smithsonian Institution, who also worked with Congressman Lewis over many years to open the National Museum of African American History and Culture.

The Ordway is presenting John Lewis: Good Trouble in partnership with the MSP Film Society and Taking Our Place Centerstage (TOPC), an initiative committed to artistic, educational and economic engagement.

You can access and pay for the film at Eventive, which also has a direct link to the panel discussion with Lonnie Bunch, Ras J. Baraka and the film’s director, Dawn Porter. The panel is produced by New Jersey Performing Arts Center, Newark, NJ.